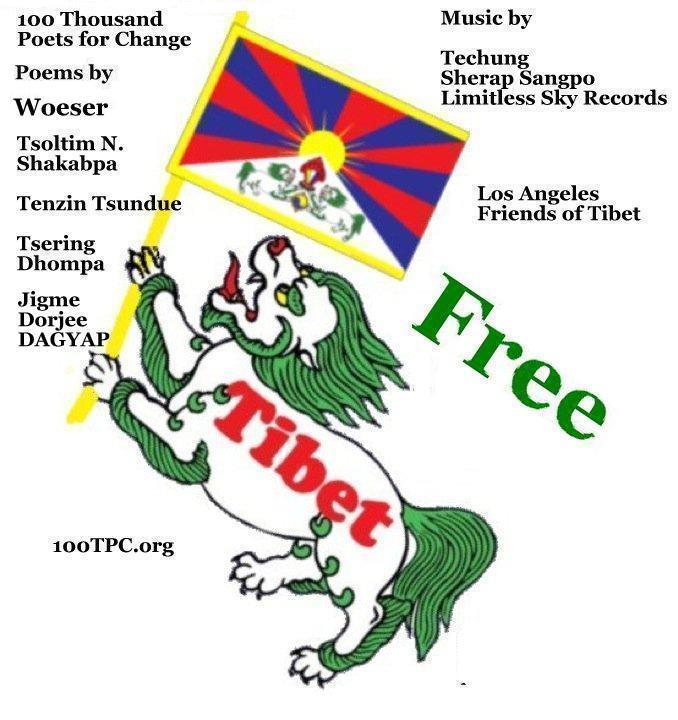 The 100 Thousand Poets for Change Tibet Awareness Event focused on human rights, freeing Tibet, and the plight of the Tibetan people. To raise awareness, there were discussions, poetry readings, Tibetan art, music, Tibetan Buddhism, open mic, and speakers. Poems by Tenzin Tsundue, a Tibetan poet/writer/activist who lives in Dharmasala, were read by others at the event. Poems by Tsoltim N. Shakabpa, a recognized Tibetan poet/activist living in Los Angeles, were read by others at the event. Due to a recent stroke, Mr. Shakabpa could not make it to the event. Tsoltim N. Shakabpa is a recognized Tibetan poet and a dedicated political activist for a free Tibet. He is the son of Tsepon Wabgchuk Deden Shakabpa, the eminent Tibetan historian, statesman, freedom fighter and former Finance Minister of independent Tibet.  Poems from Tibetan poetess Tsering Dhompa's new book, My rice tastes like the lake, were read by others at the event. Poems by Tibetan poet Jigme Dorjee DAGYAP, who lives in Gangtok, Sikkim, were read at the event. Poems from Woeser’s new book Tibet’s True Heart were read at the event. Tibetan musician, singer/songwriter, Techung, who has opened for His Holiness the Dalai Lama’s public speeches in Costa Rica, Japan, and the U.S., performed at the event. Tibetan musician and dancer, Sherap Wangmo Sangpo, and Tibetan musician Michel Tyabji also performed. There was also a Buddhist prayer/chanting for peace. Om mani padme hum.